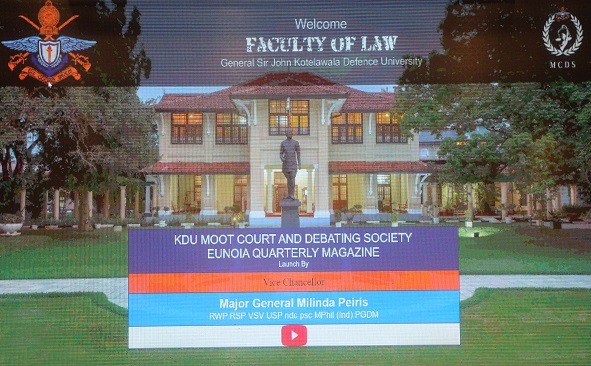 In the interests of bringing something novel and unique to the local mooting arena, the Competition reintroduced the specialty of domestic criminal law with the objective of expanding law students’ knowledge and understanding of the domestic legal framework.

Due to the prevailing circumstances, the Preliminary Rounds of the Competition took place on a virtual platform, while the four teams that made it to the semifinals were hosted at the Faculty of Law, KDU, Ratmalana. As a result of several months’ efforts by the Society, the Competition involved participants from the foremost universities and institutes providing legal education to undergraduates and students in Sri Lanka, including the University of Colombo, Sri Lanka Law College, Asia Pacific Institute of Information Technology, Sri Lanka Institute of Information Technology and CfPS Law School.

Over twenty (20) competitors put up a spirited battle for the Championship, with Sri Lanka Law College ultimately emerging victorious in the oral rounds and a team from the University of Colombo bagging the awards for written submissions. The Spirit of the Moot Trophy was won by Team A from Asia Pacific Institute of Information Technology.

The Final Round of the Competition was evaluated by the panel of judges consisting of Justice Chandra Ekanayake, Former Judge of the Supreme Court of Sri Lanka, Suhada Gamlath PC, Chairman, National Authority for The Protection of Victims of Crimes and Witnesses, and Former Solicitor General, Dr WD Rodrigo PC, Former Principal of Sri Lanka Law College, Professor Jeeva Niriella, Faculty of Law, University of Colombo and Anuja Premaratne PC.